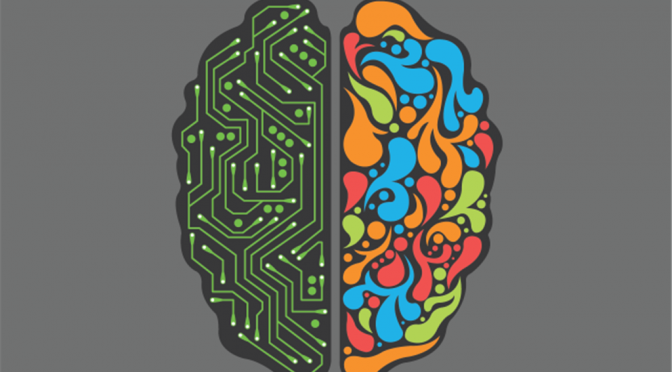 Over the coming weeks I will be looking at how teams are, or aren’t, formed. I am sure most of you will know of the Forming, Storming, Norming and Performing first proposed by Bruce Tuckman in 1965, if not I am sure I will post something about the theory in the future.

In many situations we will find ourselves having to work in teams and if we are to believe most of the commentary on the future of the workplace, we will forced into many short-term teams to deliver a specific outcome. The team will then be disbanded in order to form news teams.

Tuckman’s model works well as an academic theory but what if the team is unbalanced. Initially, I’m not looking at when one or more members of the proposed team are disengaged with the anticipated outcome this will come later. What I would like you to consider is the “sidedness” of each individual members thinking. No, not their political bias!

Is the group more left or right brain focused?

This can be described simply:

(I shall put a proper drawing in later)

If you have a team where the left is dominant then you may find that spark and creativity are stifled as there will be a reluctant to take the leap of faith required to make a significant change. Conversely, if the dominant view is right side biased the team may run away with ideas without grounding or little substance leaving the entire team in jeopardy.

Both options ultimately result in the team never reaching the desired outcome or if they do it will be after a considerable number of failures or a significant extension to the deadline as all potential risks  need to be considered be planned for. I am in no doubt that we have examples of this is our lives, projects that over run by years or are on time and deliver very little in the way of benefits.

How do you avoid being caught in the paralysis of the left-right brain struggle? First thing to do is take a step back and have a look at how the team thinks. Are they left focused or is it a right leaning team? Who has the power to within the team, is it the push forward into the future or put the brakes on as I still have questions? Remember the biggest hurdle to overcome is your own bias, if you don’t what that is yet maybe that is where you should focus your time.